Twitch is a video gamer’s platform of choice when it comes to streaming. In fact, Twitch is the leading live streaming platform in terms of live video gaming. This is due to their engaging interface both for streamers and viewers. Twitch’s streaming services include Twitch Extensions. This is another way to get more fans on twitch too.

Twitch extensions are live apps that interact on a gamer’s live stream. This was created in 2017 to help gamers grow their audience and help the Twitch community through interactive broadcasts. Other feature of Twitch extensions includes panels and overlays that increases the viewer’s quality of streaming.

Under categories also includes types of extensions available, which are:

Here are some of the games that have specific Twitch Extensions:

Extensions that fall under the Games in Extensions category are stand-alone games on extensions. These Twitch extensions help streamers retain and maintain their viewers. During a boring part of a game, viewers could use these games to play while watching a broadcast.

Here are some of the Twitch extensions available under Games in Extensions:

By using StreamLegends, viewers can build their own town in your channel panel while you stream and play. This is an RPG extension that allows a viewer to quest and build guilds with each other in the community.

Through StreamLegends, broadcasters allow their viewers to become part of their town where they can join in the action. 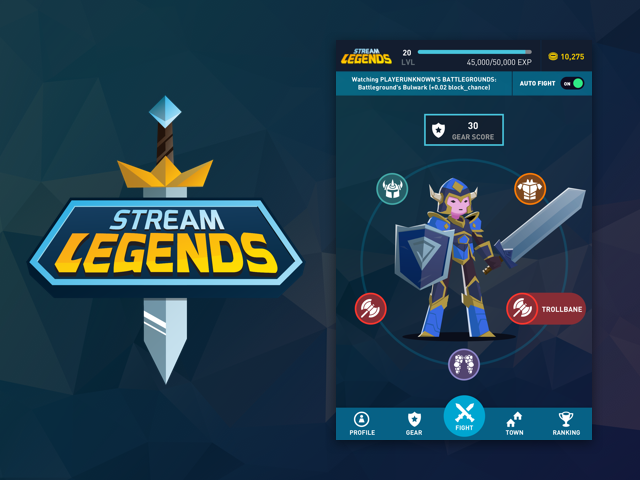 Mini-game will appear on a panel on top of your screen and lets multiple players use it. 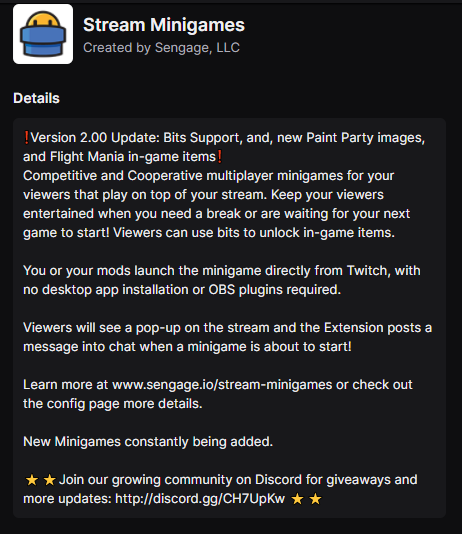 This panel extension provides game and activities to help your viewers engage while watching your stream. Twitch Arcade was created by Amazon Game Studios.

Quiz Kit is one of the best Twitch extensions if you want to host your own quiz for your audience. This will keep your audience active in order for them to have the correct answer. It also has ready-made questions released weekly if you don’t want to create your own.

This Twitch extension is created by Prime Gaming. This extension reminds viewers of their free Twitch Prime channel subscription. Also, using this extension overlay will redirect the viewer in availing their free loot. 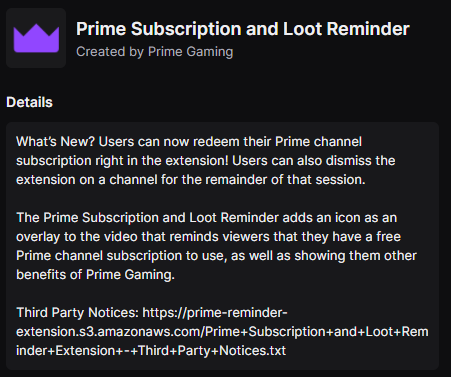 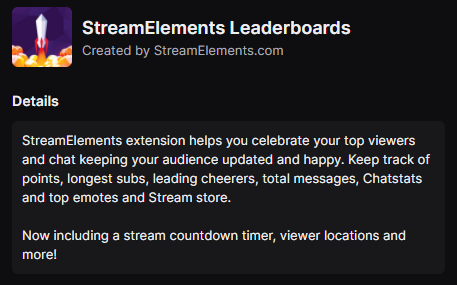 Using Streamlabs panel extension will enhance the gamer’s channel and makes monetization easier. It is considered one of the best Twitch extensions because it is an all-in-one tool where a follower can earn loyalty points, request songs, vote in polls, enter giveaways, and play mini-games. These Streamlabs features increase the possibility that viewers will come back to your channel.

Streamlabs widget extensions are available on Twitch Extension Manager. Some widgets from Sreamlabs include:

Music extensions on Twitch stream are created to add a personal touch to their broadcast. An extension could allow streamers to take up song requests from viewers and create their own playlists for their viewers.

This Twitch extension share your music with your viewers on an overlay extension. In using Amazon Music, for your viewers to be able to listen with you, they should also have Amazon Music. Streamers could also add their Amazon affiliate account to earn from referrals.

The audience will most times ask what song you are currently listening to. The song currently playing could be asked multiple times. To save you energy, use this Twitch extension on your stream so you can remove this from many things you need to look after.

This is a Twitch overlay extension that provides details of the song the streamers are currently listening to and the previous songs he played. This also allows streamers to create a playlist for people to follow.

Polling and Voting extensions are created to ask for feedback from people in your Twitch stream. This type of extension aims to gather input on how to improve a streamer’s channel and how streamers should proceed with the game.

This Twitch extension provides a simple voting system for stream viewers. It also has other things to offer like multiple games, characters, and features like filters, messages, and Bits voting. After installing this extension, activate it on Overlay 1.

This is a stream extension that gathers opinions from your viewers. This keeps track of suggested improvements for your channel other than chat.

This stream extension is developed by Amazon Game Studios. It allows Twitch streamers to display customized polls and quizzes to their community.

Some features of Twitch Picks are, first, people can vote more than once in exchange for Bits. Second, poll results could be hidden from their viewers. Lastly, background design could be customized to fit your channel’s brand image.

Extensions that fall under the Schedule and Countdowns category help streamers share their streaming schedule. It could show countdown timers or event calendars.

This stream extension works as a panel extension. Activate it by setting a schedule for your next broadcast in the Configuration panel. If a streamer is planning on taking a break, they could set a return date so fans would know when they will be back.

Streamer tools panel extensions are developed to enhance the stream. Extensions under this category could offer affiliate revenue to gamers and could also include an opportunity to sell their own merchandise.

Panel extension on Twitch for Streamer tools can provide the audience a more personalized viewing experience. There are more than 120 extensions under this category.

Amazon Blacksmith is also known as Gear on Amazon. It allows Twitch Affiliates and Partners to display a list of gaming gears they use on their stream. The list is shown as a panel extension on their page. They could customize the background and text color that match their channel’s design.

The list on the panel shown gives their viewers an idea of the equipment they use. Also, they could earn through affiliate links on the list if people want to buy the same set of gears. They earn through referral fee for all products their fans bought on Amazon as they click through the Amazon list on someone’s channel.

This panel extension creates custom merchandise for the channel. These component extensions also allow the community to browse and order right in your stream.

Dynamic Follow Buttons panel extension gives viewers a direct call-to-action for following you or other channels.

Even during the live stream, broadcasters can change the list of channels they want to promote on the panel.

As its name says, this extension allows streamers to create exclusive content for subscribers only on their Twitch channel page.

Their subscribers will be able to view members-only videos, images, and posts the streamer creates on their Twitch account.

This is a panel that displays your most recent Instagram pictures below your stream.

This extension allows the community to view your Amazon wishlist information on your page. This is one of the best video extensions, if you have a generous fan they could buy and send those items on your wishlist as a gift. By earning on affiliate links, you will also be part of their affiliate advertising program.

OWN3D provides a wide range of design packages. Their design packages enhance the overall look, mood, and sound of your channel. Streamers can look for the best combination that best fits the needs of their channel. Their packages include:

Features included depends on the package the streamer will purchase.

One way to easily increase the accessibility of your broadcast is by adding Closed Captioning for your viewers. Viewers can hide the text information or change the text chat size from small/medium/large sizes and drag it around the screen so it doesn’t block things on the main screen. All you have to do is to add this feature to your “My extensions”.

A streamer will be able to display his merchandise and make sales while playing a video game. There is also an option to release subscriber-only merch. This is well integrated with Twitch, so if someone bought your merch they will not be redirected to a new tab for checkout. This is because the checkout will be done immediately on the Twitch tab.

Viewer Geolocation extension tally the number of your audience from each country who are currently watching your stream. It has two display modes. First, the ranking display mode, and the second one is the live feed display mode.

Extension for viewer engagement is developed to increase the involvement of the community on the streams. In more than 200 viewer engagement types of extension, most of it requires Bits to utilize. This will help gamers monetize their broadcast.

Twitch also features non-gaming materials which can be seen on this extension. This extension is a way to allow a channel’s viewer to stay updated with the news while watching a stream. One can right-click on a headline to read the full story.

This extension is a way to allow your viewers to play sound effects on your stream to celebrate special moments. Streamer can upload their own sounds or select sounds from the library. Optionally, they can set Bits or Channel Points for your Sounds Alerts. So, for this extension to work, the audience needs Bits.

Bits will be added towards user’s Bits chat badges and Bits leaderboard. Each time a Sound Alert is played, an overlay and chat notification will appear.

The latest followers extension puts a panel and overlay screen list of a streamer’s new followers that flash their icon and screen name. The extension also counts the total follows a channel streamer got from the first time it started streaming on that day. ‘Latest Followers’ has Bits-enabled features.

In this extension, you will create a virtual item for your viewers. These items can be purchased using Bits. This is a way to promote competition in a streamer’s community by having a leaderboard of who has the most purchases.

This is a photo album extension on your Twitch channel. A streamer can monetize their image gallery. They can set the number of bits that a viewer must send in order to upload an image to their gallery panel. The Bits a follower sent also accumulates to their Bits chat badge and Bits leaderboard.

Blerp is an extension that lets gamers produce a type of sound emotes, or even voice recordings. Bits can be used by viewers to purchase sound emotes and be played during the game.

Stream Avatars is an extension that enables viewers on a channel page to be represented with a type of avatars and gear images that a streamer imports. The panel is a user interface for viewers to control and customize their avatars.

This is an overlay extension that allows viewers to put stickers on your Twitch channel stream. There are many types of stickers they can choose from. Bits are needed to use this feature.

It flashes emotes on your game that is available on your Twitch channel. You don’t need to update every time because it has an auto-update feature. So, if you added a new emote on your channel it will appear almost immediately.

GIPHY allows your viewers to flash some GIFs and stickers overlay on your screen. The streamer will set on which part of the screen the GIFs will be posted.

This is a type of extensions manager that notifies the streamer every time someone follows, subscribes, or cheers on their channel page.

Twitch extensions give developers an avenue to use their skills in creating a better Twitch community. Building a type of extension is a way to help strengthen a community. It is also a way of creating new interactions. Building an extension could be your way to grow your game. Lastly, it could be one of many things on how you build your business.

How To Make Someone A Mod On Twitch

How to get more Emotes on Twitch

How to Get Twitch Followers

Stay Up To Date